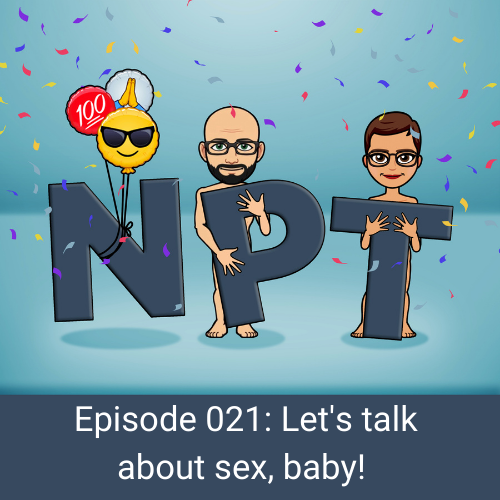 In this episode, we start to tackle the subject we’ve been teasing about since we started the podcast…sexual intimacy. We’ve titled this episode, “Let’s talk about sex, baby!” If you know the song, you know!

Sex is awesome! It is a good gift from God. But like every good gift, our enemy the devil wants to destroy it, and that’s exactly what he has done with sex in so many marriages. He’s destroying it.

Sex was designed only for marriage, and marriage, in part, was designed for sex. Not only for sex, but that’s part of the design. So, if you are not experiencing regular and consistent sexual intimacy in your marriage you will never have the marriage God designed.

15% of marriages have not had sex in the last 6 months.

And 2% of marriages are considered sexless marriages, meaning there has been no sexual intimacy for over a year, and sometimes it’s years.

We talk about physical, relational, emotional, and spiritual roadblocks to sexual intimacy. Both Sabrina and I got VERY real and raw about different roadblocks we’ve experienced in each of these areas and how we try to overcome them.

Just because the struggle is real, doesn’t mean you have to surrender to the struggle. Instead of fighting about sexual intimacy in your marriage, fight for it!

Genesis 2:25 25 Now the man and his wife were both naked, but they felt no shame.

1 Corinthians 7:3-5  3 The husband should fulfill his wife’s sexual needs, and the wife should fulfill her husband’s needs. 4 The wife gives authority over her body to her husband, and the husband gives authority over his body to his wife. 5 Do not deprive each other of sexual relations, unless you both agree to refrain from sexual intimacy for a limited time so you can give yourselves more completely to prayer. Afterward, you should come together again so that Satan won’t be able to tempt you because of your lack of self-control.

God is for great, pleasurable, and frequent sex within the context of marriage.  — Juli Slattery

God has designed every woman with her own unique pathway to sexual pleasure.  God’s design is for you to understand your own and your husband’s pathway.  But there are also obstacles and roadblocks on the way to arousal.  The greatest lovers are those who have learned to tenaciously address roadblocks along the pathway together.  — Juli Slattery

Sex is about physical touch, to be sure, but it is about far more than physical touch. It is about what is going on inside us…sex becomes a form of physical prayer — a picture of heavenly intimacy that rivals the shekinah glory of old. Our God, who is spirit, can be found behind the very physical panting, sweating, and pleasurable entangling of limbs and body parts. He doesn’t turn away. He wants us to run into sex, but to do so with his presence, priorities, and virtues making our pursuit. If we experience sex this way, we will be transformed in the marriage bed every bit as much as we are transformed on our knees in prayer. — Matt Krieg

So, we say that through our sex. But we also say to our spouses through sex, ‘This is how God wants to be one with you. He is the completer of you. He is the one who pursues you and desires you.’ We’ve over emphasized sex, but completely diminished it by not holding it up as this theological dance.” — Laurie Krieg

The Naked Marriage by Dave and Ashley Willis

Passion Pursuit: What kind of love are you making? By Dr. Juli Slattery

What’s It Like to Be Married to Me?: And Other Dangerous Questions by Linda Dillow

An Impossible Marriage by Laurie and Matt Krieg

The Naked Marriage with Dave and Ashely Willis

Heaven In Your Home with Francie Winslow