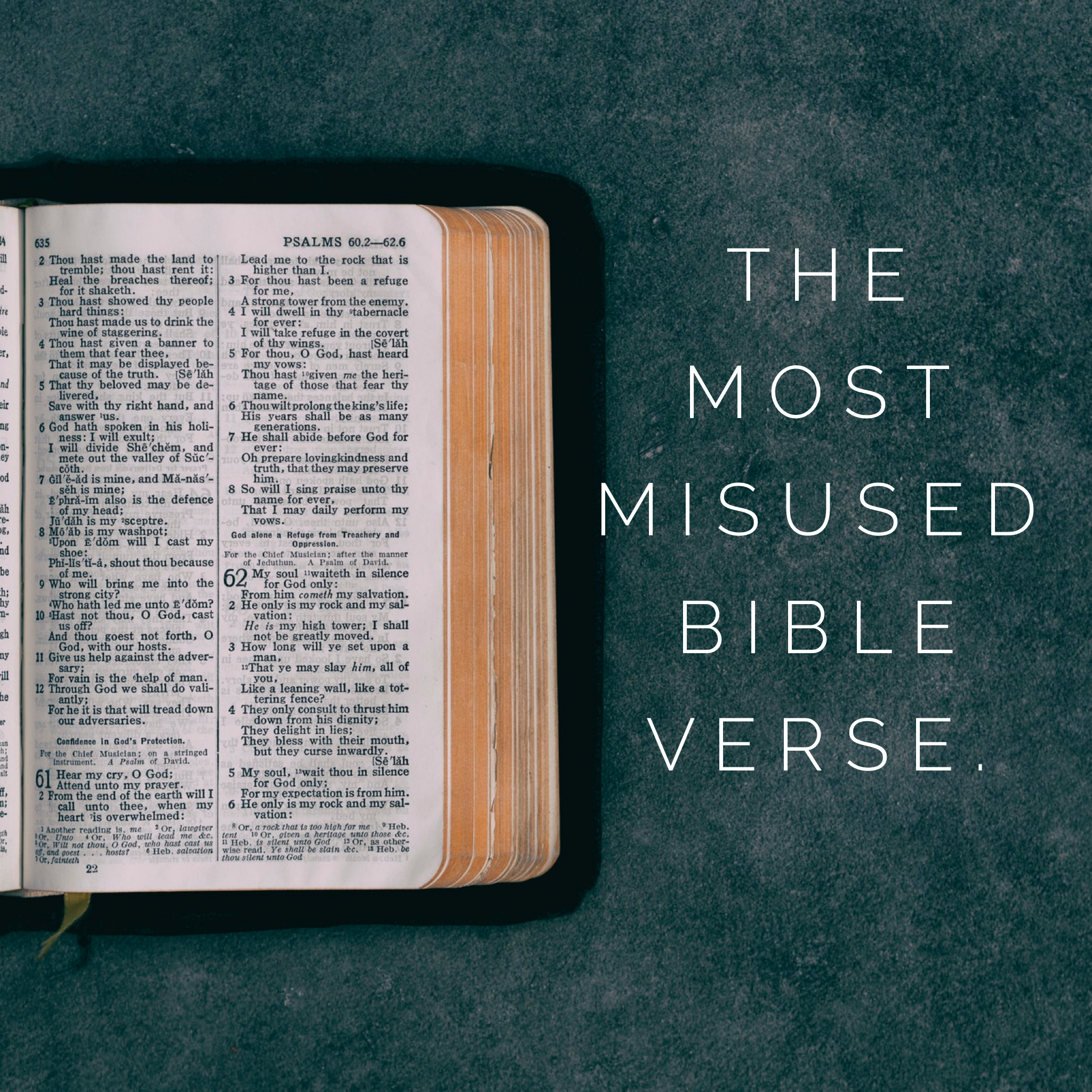 What Is The Most Misused Verse In The Bible? What is the most misused verse in the Bible and why is it so dangerous?

Disclaimer: I’m not saying that everyone does this, I’m just saying it’s easy to do.

I’ve recently been reading the book of Jeremiah for my time in God’s Word, and I came across what I believe to be one of the most misused, or at least misapplied verses in the Bible. In fact, so many people use this verse as their life verse or in times of trouble that I hesitate even to quote it because I don’t want to offend anyone. I just want to make sure that we understand the original meaning behind the verses we use.

Jeremiah 29:11 is the verse. See! Now you’re nervous that I’m going there too. I better watch my back after picking on such a mammoth verse in Scripture. But as I once again read through Jeremiah 29 a few days ago, I couldn’t help but wonder if we need to think deeper about verses like this.

Jeremiah 29:11 For I know the plans I have for you,” says the Lord. “They are plans for good and not for disaster, to give you a future and a hope.

At first glance, you can see why this has become many people’s life verse. There is a reason why it’s sold on coffee mugs, posters, mousepads, t-shirts and more. It is a verse all about God’s hope, plans, and purpose in our life. Who doesn’t need hope or want purpose? Everyone does. The problem is, we need to look at the context of how this verse was initially applied.

Jeremiah is writing as God’s prophet to the Jewish people, God’s people, who had been kidnapped and taken to Babylon as captives by King Nebuchadnezzar. After years of being unfaithful to God and His ways as expressed in His Word, God allowed them to be taken to this foreign land. The Temple and walls of Jerusalem were destroyed. Every part of being God’s “chosen people” was in question.

Jeremiah and other prophets had warned God’s people of what was coming. Had they listened and repented, God would have relented on allowing this punishment. He had done so time and time again throughout their history. But instead of repent, they ramped up their idolatry and rejection of God, which ended in their captivity.

The heading to Jeremiah 29 in my Bible says, “A letter to the exiles.” This letter was sent from Jerusalem to the elders, priests, prophets, and all the people who were exiled in Babylon. In it, God, through Jeremiah, tells these people to build homes and plan to say there. To eat the food they produce. To marry and have children. In other words, “You’re going to be in captivity for a while.” (Seventy years to be exact)

In verse 7, God even commands them that while they are exiled in this foreign land, they are to “work for the peace and prosperity of the city where I sent you into exile. Pray to the Lord for it, for its welfare will determine your welfare.” Can you imagine? The word of God to His chosen people was to “work for and pray for the good of this pagan nation.” Ouch!

Then we get to verse 11; the verse that is oft-quoted in our Christian sub-culture. But you can’t read verse 11 without looking at and applying verses 1-10. Especially verse 10. When you read verse 11 with verse 10, it takes on a whole new meaning.

Jeremiah 29:10-11 10 This is what the Lord says: “You will be in Babylon for seventy years. But then I will come and do for you all the good things I have promised, and I will bring you home again. 11 For I know the plans I have for you,” says the Lord. “They are plans for good and not for disaster, to give you a future and a hope.”

The word “For” in verse 11 is directly linked to the promise in verse 10; that after seventy years, God would do the good things He promised and would bring them back home. Again, this promise would not be fulfilled for another Seventy years.

The reality is, many of the people this message was sent to weren’t going to see “the future and the hope” that God promised. Seventy years was much longer than the average life-span of anyone at that time. Even if you were even five years old, or a newborn, there was a high chance that you would not see this promise fulfilled. More than likely, this promise to the people was one that their future children or grandchildren would enjoy, not them.

At the very least, even if they did live long enough to see the promise fulfilled, they had to endure seventy more years of captivity in a foreign land before experiencing it.

All that to say, I’m not against using this verse. In my own life, God has given me promises from Scripture for specific times in my life that are completely unrelated to the original context. There are many verses that I personally hold on to, even feel that God “gave them to me”, that I could write this very same blog about as well.

So please don’t hear me say that you should never use Jeremiah 29:11 for your life. In fact, please do! It is a beautiful, poetic picture of the “overwhelming, never-ending” love of God. God never gave up on His people, and He won’t give up on us either. So go ahead and quote this verse. Go ahead and claim it over your problems and your seemingly hopeless situations. Drink proudly from that coffee mug and hang the poster on the wall. Just be careful. You might have to endure seventy more years of your problem before you get to experience the promise.

The promise of God is not the point, the One who makes the promise is. Don’t elevate God’s promises to a place that is higher than He who gives it. God is the point. Not us. Not our problems. Not even the promise.

The promise of God is not the point, the One who makes the promise is. Don't elevate God's promises to a place that is higher than He who gives it. Click To Tweet