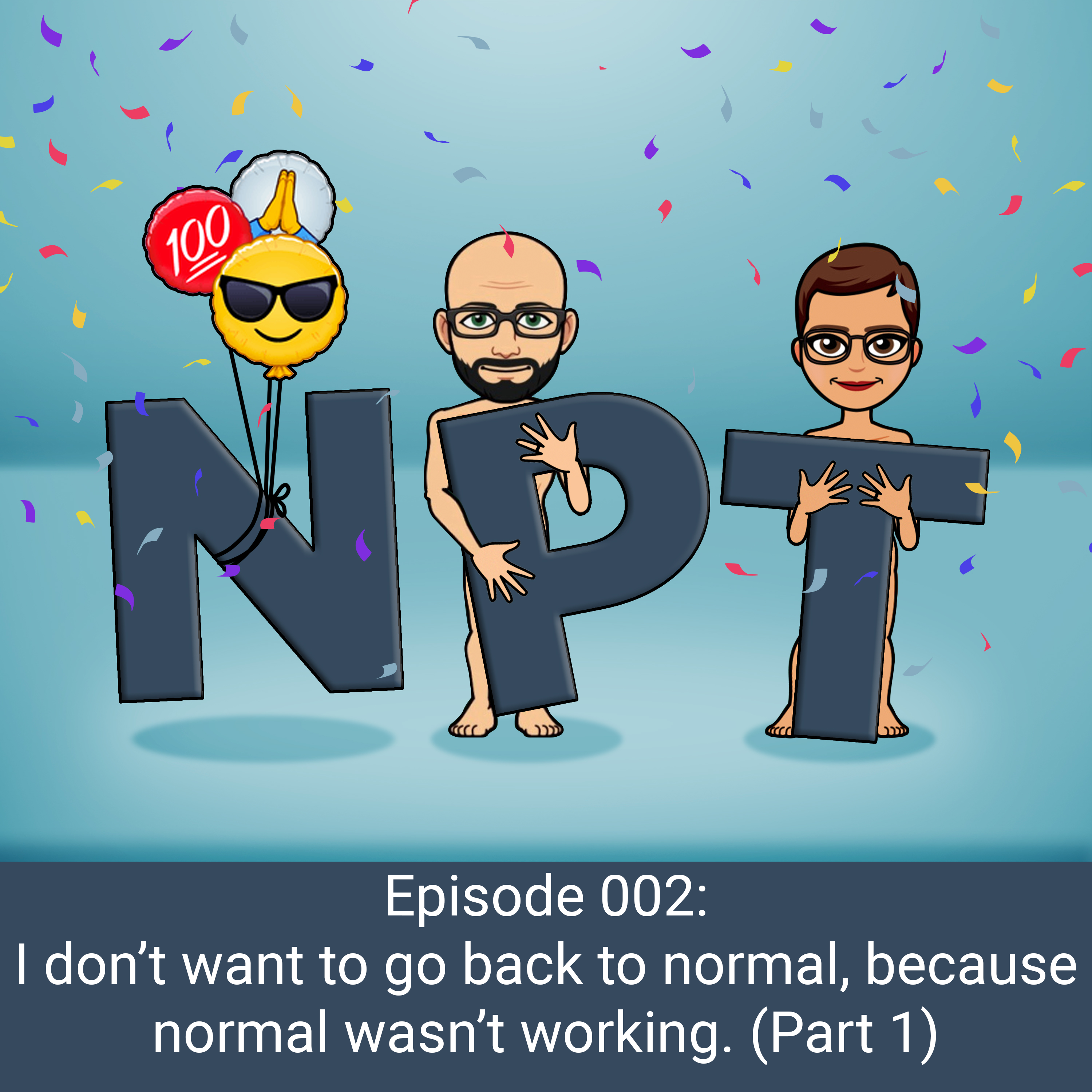 Episode 002: I don’t want to go back to normal, because normal wasn’t working! In Episode #002 we start a four-part series of podcasts called “I don’t want to go back to normal, because normal wasn’t working.”

Today we’re going to highlight six things total that we don’t want to go back to normal on, then in the next three podcasts, we’re going to cover two of the six things each time and offer some practical next steps and solutions that can help us all not go back to what was normal in these areas. All six of these I think were exposed either during this pandemic or by this pandemic.

I think we both agree that we understand the statement, “I want to go back to normal.” Our world was flipped upside down very rapidly. It’s not like we had time to prepare for a pandemic, so, at least for us in America, we went from a pretty stable normal, to chaos in a NY minute. Pun intended since NY was the original hotspot in America.

The second reason I think we should stop saying it is in the title of this episode, normal wasn’t working. At least not for some very specific and very important parts of our lives.

These are not in order of importance or anything, but I will say, I think the first three were the first things exposed by the pandemic.

We want to make it clear, in every single one of these, we have made massive failures in our own life. We’ll share some with you over the course of the podcast. We have been unhealthy in every one of these areas at some point and are still learning and growing in all of them today. And we are still making mistakes.

And please understand. We aren’t trying to cast judgment on anyone who might be struggling in one of these areas or disagree with us on something. We just want to see everyone thrive in every part of their life, and these are some things that we see that we don’t think we are thriving on in America.

We’re not offering a lot of answers today, just pointing out what we don’t want to go back to. We’ll get into some solutions in the following podcasts.

The six things we don’t want to go back to normal on:

1. The way things were financially

Pre-COVID statistics showed that at least 75% of Americans lived paycheck to paycheck.

68% of Americans don’t live on a budget.

I’ll tell you this, you won’t find one place in the Bible where debt is spoken of positively. It’s always spoken of in a negative light. Always.

The average American household has $38,000 in consumer debt, not counting their mortgage. The average car payment is $471.50.

2. The way things were with mental health

Before COVID 19, 40 million Americans, or roughly 19% of our population had a diagnosed anxiety disorder. That is only the diagnosed cases.

3. The way things were physically

4. The way things were spiritually

Lifeway research showed that only 32% of Protestant Churchgoers, so non-Catholic Christian churchgoers, only 32% personally read their Bible every day. That means 68% of churchgoers aren’t reading their Bible regularly. 12% said they read it rarely if ever. That’s from churchgoers.

In the vast majority of churches, no more than 35% of people engage in a small group.

63% of church attenders go once or twice a month at most. 30% go seldom or never.

5. The way things were relationally

Before COVID 19, the divorce rate was already at 50%.  In New York, within the first week of stay at home orders, marital attorneys reported a 40% increase in divorce inquiries.

6. The way things were with the speed of life

Pre-COVID statistics showed that 60% of U.S. adults said they at least sometimes felt too busy to enjoy life.

74% of parents said they at least sometimes felt too busy to enjoy life.

1/3 of all children said they always felt rushed.

60% of employees report being in a high-stress job.

We now spend on average 5 hours a day on our phones. We check our phones once every 12 minutes, or about 80 times a day. 39% of Americans say technology has generally made their job more demanding.

“I don’t want to be a slave to anybody. So I think about that. That’s a filter. That verse (Proverbs 22:7) could be a filter. By doing this is, it going to stop you from saving money or stop you from being generous? I’d rather not have stuff so that God can use His money that He gives us the way He wants to use it.” – Sabrina

“I think we need the freedom to talk about mental health issues, acknowledge it, and deal with it. For years I think mental health was swept under the rug, or just ignored. But it’s still real, it affects millions of people, in fact, it was at an all-time high heading into COVID-19.” – Jeff

“You’ll never experience the change you need without choosing to live in community. You won’t.” – Jeff

“Marriage is not the answer for loneliness, Jesus is. There are lots of married people who feel alone in their marriage. Your spouse cannot complete you. No spouse can complete you. If you’re looking for another human to satisfy you, you will always be unsatisfied.” – Jeff

“If we’re not always on the go, then we’re always on our phones.” – Jeff

Kill the Spider by Carlos Whittaker

Proverbs 22:7 Just as the rich rule the poor, so the borrower is servant to the lender.

Jeremiah 17:9 The human heart is the most deceitful of all things, and desperately wicked. Who really knows how bad it is?